Background: Lumbar discectomy is the most common operation in spinal surgery. Albeit rarely, it can cause severe complications such as vascular and visceral injuries.
Case report: We report a case of a 30-year-old woman who developed acute abdomen on the third postoperative day following L5-S1 microdiscectomy. At the laparatomy, appendix was found to be partially transected at midlevel and appendectomy was performed. Her postoperative recovery was uneventful apart from the lumbar wound infection.
Conclusions: Surgeons should be aware of visceral injury as a possible complication of discectomy and provide early diagnosis and treatment to prevent potentially fatal outcomes. In addition, to our knowledge, we present the first case report of appendix injury secondary to microdiscectomy and a brief review of the literature on intestinal injuries following lumbar disc surgery.

Lumbar discectomy is the most common operation in the spinal surgery. Although it carries low morbidity and mortality risks, life threatening complications such as vascular and visceral injuries can occur by ventral perforation [1-20].

The anterior portion of the annulus fibrosus is much thicker than the posterior portion. Even though the anterior longitudinal ligament might be expected to act as protective structures against inadvertent penetration by instruments during discectomy, it is obvious that ventral perforation may develop easily, and without the surgeon’s awareness [21-22]. Although the incidence of asymptomatic annulus penetrations is as high as 12 % of lumbar discectomies, symptomatic ventral perforations occur in 1.6-17 per 10000 cases [3,23-25]. Fortunately, the frequency of intestinal injuries is very low and much less common than vascular injuries.

In this article, a case of injury to the appendix as a complication of lumbar microdiscectomy is presented and a brief review of the literature on intestinal injuries following lumbar disc surgery is provided.

A 30-year-old woman was hospitalized in neurosurgery clinic with a three-month history of pain in her waist and left leg. Neurologic examination revealed that straight leg raising test was positive at 30 degrees in the left leg; left achille reflex was hypoactive and hypoesthesia was observed in the left S1 dermatome. Other physical examination of the patient was normal. On the lumbosacral magnetic resonance imaging a left paracentral disc herniation which was compressing the S1 nerve root was detected at the left L5-S1 level. Left L5 hemilaminectomy, L5-S1 microdiscectomy were performed. The patient was discharged without incident at the following day. On the third postoperative day she was admitted via emergency service with the complaint of pain in her abdomen and waist radiating down to the right leg. Her blood pressure was 90/60 mmHg, pulse 125 /min, temperature 38.5°C. She had an acute abdomen with guarding and rebound tenderness predominantly on the lower quadrants and had a painful lumbar incision. Leukocyte count was 16000 / mm3 and C-reactive protein 98 mg/L. An abdomino-pelvic computed tomography scan showed inflammatory infiltration of the prevertebral space extending to adjacent mesenteric fatty planes at the level of L5-S1 discectomy and a defect of left L5 hemilaminectomy as well (Figure 1). 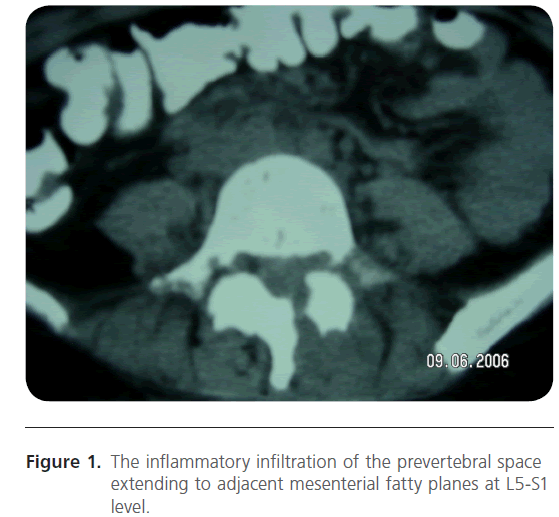 While a laparotomy was decided, further exploration revealed a retroceacal appendix nearly 10 cm in length, which was partially transected at midlevel. Although proximal half of the appendix was intact, distal to the transected area, inner layers of appendix were cored out except the serosa (Figure 2). 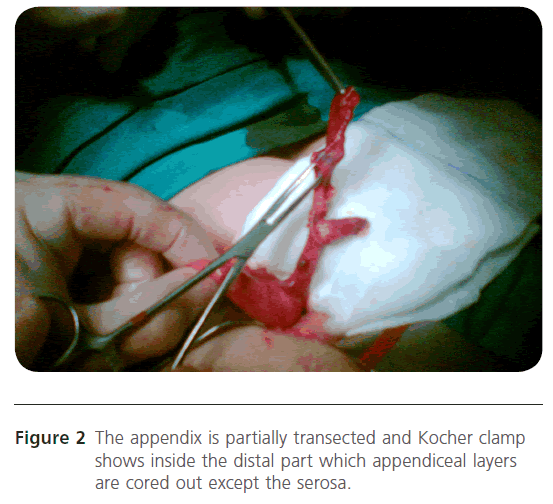 Figure 2: The appendix is partially transected and Kocher clamp shows inside the distal part which appendiceal layers are cored out except the serosa.

There was no gross contamination in the vicinity of the appendix and appendectomy was performed. Inspection of the retroperitoneum demonstrated a small hole consistent with the level of L5-S1 disc space. Her postoperative recovery was uneventful apart from lumbar wound infection, which was treated by appropriate intravenous antibiotics for Pseudomonas aeruginosa identified from the wound culture. She was then discharged with no neurological sequel 12 days after appendectomy. She is currently doing well at the third year of follow-up.

Intestinal injuries resulting from ventral perforation during discectomy are rare, but may cause dramatic consequences. To date, 22 cases of intestinal injury following lumbar disc surgery have been reported in the literature [1-3,6-10,13-18,20] (Table 1). Sixteen of them occured during conventional discectomies and 6 in microsurgical procedures. However, visceral injuries during transabdominal discectomy were excluded from this review as the mechanism of the damage is mainly retraction injury. Table 1 Summary of the cases reported in the literature.

Intestinal injury was first reported by Harbison [7] in 1954. Shwartz and Brodkey [16] later reported the first case of intestinal injury after microdiscectomy. Fourteen cases of these have occured following surgery at the disc level of L5-S1 [1,2,8-10,13,15,17,18,20]. Only three cases have been reported at the L4-L5 interspace [2,7,16]. In five cases there were no details about the level of the injury [3,6,14]. Small intestine is more likely to be injured than the large intestine, since the root of the mesentery of the small intestine arises in front of the vertebral column, extending obliquely from second lumbar vertebra to the right sacroiliac joint [18]. Ileum is the leading site of the injury and accounts for 50 % of all cases. There were two injuries for both of the sigmoid colon and the jejunum and only one in the appendix. Pappas et al. [14], Goodkin et al. [6] and Bilbao et al. [1] have reported three injuries in the small intestine and one tear in the bowel without further anatomic specifications.

Clinical manifestations of such injuries may be extremely variable. Diagnosis is established intraoperatively if the intestinal mucosa is removed together with the disc specimen [2,7]. It should be duely noted that this is most commonly recognised with the signs of acute abdomen within a few days following the surgery, as in our case. So, postoperative abdominal complaints should be carefully evaluated by surgeon in terms of intestinal injury. Abdominal radiograph or tomography may be helpful for the diagnosis. In fact, in one-third of the cases radiological examinations of the abdomen have shown free air in the peritoneal cavity [1,8,9,16,17,20]. Kollbrunner [13] has reported a peculiar case presented with bowel obstruction. In this case, stenosis of the sigmoid colon has been suggested to develop as a result of local scarring and fibrosis of organization of hematoma from a retroperitoneal bleeding. Occasionally, diagnosis may not be made for several weeks and months due to formation of a mature intraabdominal abscess which gradually develops and induces only mild symptoms at the onset. Shwartz and Brodkey [16] detected sigmoid colon laceration and abdomino-pelvic abscesses on the 19th day after microdiscectomy. Wound infection with positive culture of intestinal pathogenes can be another manifestation of such injuries [2]. In the case reported by Shaw et al. [15] the patient who had persistent wound discharge for three months after the operation eventually colonised Escherichia coli on culture. A fistulogram showed an unexpected communication between the cutaneous drainage site, through the disc space to the small bowel. In addition, many authors have reported cases of discitis in association with the intestinal injury [2,6,15,16,18].

The unique case regarding the appendix injury due to lumbar disc surgery had been reported by Birkeland and Taylor [2] in 1970. In this case, injury of the appendix was incidentally found at the laparotomy due to an intra-abdominal arteriovenous fistula 2.5 years after the discectomy. This patient also had a history of the wound infection which required antibiotic therapy of nine months besides two debridements to heal. To our knowledge, the present case is the first report of appendix injury as a complication of lumbar microdiscectomy. We detected the appendix was partially transected nearly at midlevel and was free of mucosal and muscular layers in distal part. A possible explanation of this is that pituitary rongeur grasped the appendix unintentionally during the discectomy and the distal part of the appendix was cored out along with the disc material.

The definitive treatment of intestinal injury depends on both the site and the extent of injury together with the period of time between damage and laparotomy. Early diagnosis and treatment may prevent potentially fatal outcomes. Hoff-Olsen and Wiberg [8] have reported a mortality due to septicemia because of an ileal injury which was treated in only two days postoperatively.

The avoidance of the ventral perforation is the most important manevuer in prevention of visceral injuries. The most offensive surgical instrument in this issue is the pituitary rongeur [2,3,11]. Several authors have recommended that the depth of disc space penetration with instruments should be kept to less than 3 cm [2,16,2]. Depth marking of instrument may be useful to prevent the surgeon from inserting it too deep [11]. Moreover, the failure to withdraw the whole volume of irrigant instilled into the disc space should raise the suspicion of ventral perforation and subsequent intestinal injury. Although the pathologic examination of the disc specimen is not routine, it is rational if any doubt is present. In one case of Birkeland and Taylor [2], diagnosis was ascertained by detecting small piece of tissue identified as bowel wall in the disc material. Another operative strategy is to carry out a limited discectomy rather than a radical discectomy. Birkeland and Taylor [2] have stated that total discectomy is inadvisable even in the hands of experienced surgeons, and only removal of easily retrievable material from the disc space is required for effective surgical treatment. Other predisposing factors in the occurence of ventral perforation are body habitus, patient positioning, use of magnification, anterior disc ruptures, recurrent disc hernia, previous abdominal surgery, abdominal irradiation therapy, and surgeon’s experience [2,26-29]. However, none of these has been proven as a consistent risk factor [6,17,19]. In addition, preoperative evaluation of the prevertebral structures along with the visceral anatomy is important, which can show pre-existing defects in the anterior annulus and anterior longitudinal ligament [10,30].

In conclusion, a meticulous dissection is fundamental in the prevention of the ventral perforation and subsequent intestinal injury during the discectomy. However, they still may occur without surgeon’s awareness. Intestinal injuries should be born in mind as a possible complication of lumbar disc surgery in patients who present with acute abdominal complaints or prolonged wound infections. Early diagnosis and appropriate treatment may prevent potentially fatal outcomes. Moreover, the patient should be informed of the existence of such complications and written consent is advised.